What is the KRAS-Variant

What is the KRAS-Variant

The KRAS-variant belongs to a new class of inherited genetic variant that predicts increased risk of cancer.1-6 We have helped show that this new type of genetic variant can be impacted by lifestyle choices. For women with the KRAS-variant, cancer may be prevented by maintaining estrogen levels.7

The KRAS-variant is an example of a new type of biomarker that can explain the genetic cause of cancer for many more families with strong cancer histories.

The KRAS-variant is found in up to 25% of cancer patients, making it far more common than previously known genetic variants associated with cancer, such as BRCA1, which is found in only 5% of breast and ovarian cancer patients. 17,18

Cancer that occurs without known family history or an inherited genetic difference.

Cancer caused by known inherited genetic variants such as BRCA or CHEK2.

Cancer that occurs in families more often than would be expected by chance, but there is no known genetic reason.

In your cells, your DNA is continuously converting into molecules (called RNA), which then become proteins. These proteins serve many vital functions in your body.19 However in recent years, scientists have discovered that DNA also makes RNA molecules that never turn into proteins. These molecules are called non-coding RNAs and some of them appear to “control” what and how proteins are used throughout your body.20

This discovery has changed the fundamental understanding of biology, and has also led to new findings, like the KRAS-variant.

The KRAS-variant explains a large percentage of hereditary cancers

While it had been believed that most cancer was due to chance, as only 5-10% of cancers had known hereditary causes,21 we have now found that much more of cancer risk is passed down from your parents.

Our work at MiraKind is to discover the genetic variants for many more cancers, and to use this information to define the strategies and behaviors that may help reduce cancer risk. What the KRAS-variant may mean for your health

Who should get tested for the KRAS-variant?

If you have a family or personal history of cancer, or are a female who is peri- or menopausal, you may want to get tested for the KRAS-variant.

Getting tested for the KRAS-variant provides information that you and your doctor can use to make informed decisions about your health.

Learn more about why and how to get tested here. 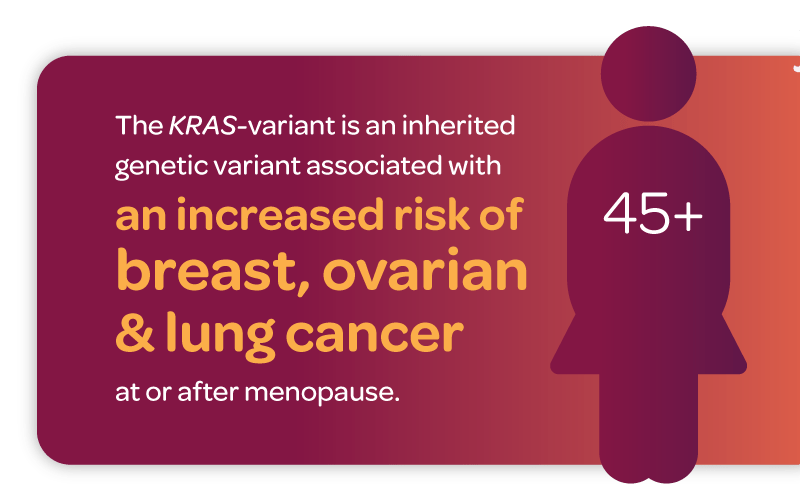 Why join a MiraKind research study?

By joining a MiraKind study, you can play a role in helping MiraKind answer some of the most pressing questions associated with cancer risk for individuals with inherited variants like the KRAS-variant. Your participation in a study helps us get closer to finding the answers to improve health for all individuals with this new class of genetic variant.

By joining a MiraKind study, you can play a role in helping MiraKind answer some of the most pressing questions associated with cancer risk and prevention for individuals with the KRAS-variant.

Enroll in a Study